What Do Native American Code Talkers Have To Do With Cybersecurity?

It’s not the first time a secret language and technology partnered together for battle. The role of code talkers and cybersecurity.

What Do Native American Code Talkers Have To Do With Cybersecurity?

If you ever see words like this, “Moparopyop hopadop a lopitoptoplope lopamopbop,” it’s not gibberish talk. The secret language of Opish means, “Mary had a little lamb.” What is more profound is that during World War II, the allies also used a secret language found only in an ancient culture in North America.

Where did the language come from? Who are these unknown people? How did their words change the course of world history forever? And how does their Native American code talking and cybersecurity connect with you and your business today?

You may not see it, but your business faces a constant battle from cybersecurity threats and malicious actors trying to break through your defenses. The incredible story of the American code talkers has valuable lessons that will help turn the tide against your enemies and give you the upper hand. 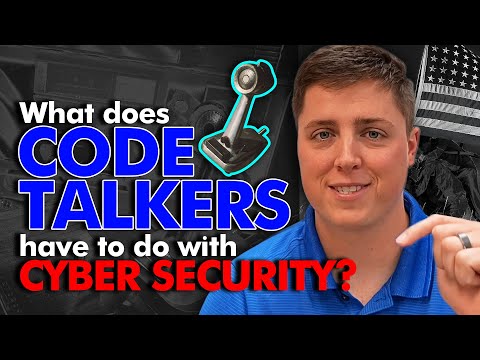 Who Are The Native American Code Talkers?

If you’re a fan of American history, you know that the Native American Code Talkers at the beginning of World War II were 29 Navajo American Indians. But, during World War I, the Choctaw language preceded the use of the Navajo language to create and send secret, tactical messages. That strategy was instrumental in a successful surprise attack against the Germans.

However, Germany and Japan sent their students to the United States after the first world war to learn the Choctaw language. They wanted their young men and women to study Native American languages and cultures, such as the Comanche, Choctaw, and Cherokee. When that happened, U.S. military services took notice and needed another option.

How Does Philp Johnston And The CIA Fit Into All Of This?

Believe it or not, Philp Johnston was a World War I veteran whose parents were missionaries on a Navajo reservation, where he grew up and spoke the language fluently. Johnston knew the language so well that at age 9, long before World War I, he became an interpreter for a Navajo delegation sent to Washington, D.C., to lobby for Indian rights.

According to the CIA’s website, in 1942, Philip Johnston was reading a newspaper article about an armored division in Louisiana attempting to develop another code using Native American languages. He had an idea he presented to the military. Though there were concerns about the security of a code based solely on a Native American language, the United States Marine Corps gave Johnston’s idea a try. Along with the Navajo men, Johnston was permitted to enlist and participate in the program. As a result, the Navajo Code Talkers and the unbreakable code began. [1]

Was The Navajo Language The Perfect Code Creation Option?

One of the first things the United States Marine Corp discovered is the Navajo language was not written, only spoken. That provided the perfect option to create a code. If you can’t see or read it, you can’t break into it. Then when the military incorporated word substitution as part of the code structure, it became virtually unbreakable, encoded language.

It begins with a word substitution to give you an idea of how they created it. For instance, if you were describing a mine sweeper ship, the Navajo word was CHA, and the literal translation was the word, Beaver. If the recruits wanted to describe different types of planes, they used the names of birds. At the beginning of the war, the code only had 211 vocabulary terms but would increase to 411 by the end.

Those early lessons about secret codes, code talkers, virtually unbreakable structures, and developing never before seen encryption set the stage. Your enemy is out there, looking and searching for ways to gain entry into your IT infrastructure. Like any war, your business is also on the battlefield day in and day out, relentlessly targeted.

To have the best possible outcome using innovation and preparation, as the United States did, allows you to have the upper hand. It doesn’t mean the battle ends; your cybersecurity controls the outcome as you plan for the next disruption. However, as the enemies did during the war, malicious actors exist today. They, too, are studying the latest security methods with one intent, trying to cripple your business network system. Except, they don’t know that you know us.

MainStreet IT Solutions Helps You Innovate To Avoid Disruption

Is it crucial that your organization avoid all technology disruptions? You’d say yes if you’re a business owner or decision maker. We have a secret—MainStreet IT Solutions are your modern-day cybersecurity code talkers. Contact us for innovative IT solutions.

Does Chris Massey Have All The Answers For Co-Managed IT?

What The Heck Is SEO?