Is Kaspersky Antivirus Safe To Use in 2022?

Kaspersky Lab, is currently under fire for its Russian connections. It leaves states, local, and federal agencies trying to figure out what to do next.

Businesses need antivirus programs and malware prevention suites on their computers to stay safe. Every computer with access to the internet needs one, especially if you rely on online processes to make sales and connect with consumers. But one online security company, Kaspersky Lab, is currently under fire for its Russian connections. It leaves states, local, and federal agencies trying to figure out what to do next.

The ongoing war in Europe after the Russian invasion of Ukraine made headlines in February 2022. It has created numerous concerns affecting the economy and cybersecurity risks, mostly associated with the Russian company Kaspersky. Over the past years, the Moscow-based company products have long served with effective anti-malware tools. The question now is, is it still safe?

In this post, we will discuss the various issues affecting Kaspersky, why governments are warning against its use, and whether you can still trust it. 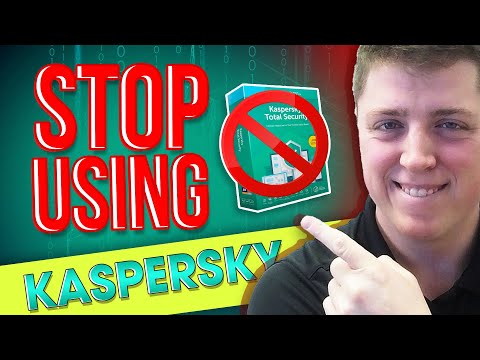 Kaspersky Lab is not some fly-by-night or a low-reputation startup. The company has been in operation for over 20 years. It started operations in 1997 in Russia and then expanded into the U.S. immediately after. Independent experts used to judge Kaspersky’s cybersecurity products to be safe, but the Russian invasion of Ukraine has questioned the assessment.

Western governments have responded to the war with several economic sanctions against most Russian companies and cybersecurity warnings that could face Kaspersky products. Some governments have already banned the use of Kaspersky products naming it a threat to national security. The main fear is that the Kremlin can exploit the company’s network. Kaspersky denied these claims saying they are just politically motivated.

Today, most cyber wars are often physical. The ongoing war has given rise to several cyber threats, such as an increased number of phishing attacks by taking advantage of the political situation. Apart from governments warning against the use of Kaspersky for network protection, independent review sites such as PCMag stopped recommending its products.

Security issues surrounding Kaspersky are not new but have increased exponentially with the Russian invasion of Ukraine. Other governments joining the U.S. to warn users and operators about Kaspersky products include Germany, Italy, and Lithuania.

Antivirus software needs to have deep access to your computer to work effectively. It allows it to detect any malware and other harmful files residing or trying to enter the computer systems. Most antivirus software has extensive privileges to maintain permanent connections with business servers reliable for virus definition and application updates.

Kaspersky cybersecurity products are no different. They monitor devices in real-time, send and receive files from computers and servers, and push updates from remote servers while eliminating threats. The risk highlighted by government agencies stems from the ability of the company to keep its networks used to process customer-sensitive information from the Russian Government.

The company’s headquarters is in the Capital, Moscow, raising many concerns that its network is vulnerable to exploitation from the Government.

Government warnings, including sanctions on several Russian businesses, indicate that it would be best to heed their warning and stay away from Kaspersky to boost your security. Here are some security concerns raised by several governments over the use of Kaspersky.

Kaspersky Banned By the U.S. Government

In 2017, the U.S. banned its federal employees from using Kaspersky. The ban became law after Congress raised concerns about the company’s ties with Russian intelligence.

After the attack on Ukraine by Russia in February 2022, the U.S. made deliberate attempts with private briefings on the state of the company with its likelihood of being vulnerable to Russian interference. From these talks, the U.S. Federal Communications Commission (FCC) added Kaspersky to its list of national security risks in March 2022.

After the Ukraine invasion by Russia, the U.K. government updated its cybersecurity guidance to curb the threats of rising cyber threats due to the war. The U.K.’s National Cyber Security Center offered the next approach for organizations to use, considering the risk on all Russian-controlled tech services.

The NCSC further highlighted that any organizations that offer services to Ukraine would be responsible for critical U.K. infrastructure. It may end up being used in pro-Russia propaganda when they get compromised.

One blog post outlining the update recommendations by NCSC warns that individuals using Kaspersky will not be safe if sanctioned, rendering it unable to update its products remotely. It will increase safety concerns, and malware can easily get into their networks. Critical virus definition updates will cease leaving the antivirus protection vulnerable to attacks.

Following the U.S. ban on Kaspersky, Lithuania banned its use of sensitive computers in 2017. These include all computers and any sensitive networks directed by the Lithuanian government. Some of these include networks associated with protecting energy data, finances, and transportation in the country. Anyone within the private sector with networks protecting any sensitive information must also adhere to these set rules.

Can You Trust Kaspersky?

There are no allegations publicly proved about using Kaspersky products, but governments have raised concerns or banned their use, especially for systems operating on critical infrastructure. Anyone needs to decide whether or not to continue using Kaspersky. The government directives are mere guidelines to help you understand how the world of cybersecurity is changing.

If you are worried about the risk of using Kaspersky, you can switch to the more reliable alternative cybersecurity solutions we offer at Mainstreet I.T. Solutions. We have the best I.T. services for unique challenges and address the changing cybersecurity atmosphere.

As a managed service provider, we take your company’s I.T. burden off your schedules and develop the best security solution to protect you against cover threats. We have a team of professionals who love new challenges and have the expertise to handle any I.T. issues with certifications to prove it.

Take the first step and call us. We look forward to hearing from you and becoming a lifelong partner. Get an instant service quote today.

Premier Custom-Built Cabinetry Selects Mainstreet To Help With IT Services

How to Pin Messages in Microsoft Teams